Just for fun, I want to explore the first meal concept from different perspectives in time and cultures. The list is a bit Anglo-centric, but I cannot deny my exposure is very American and English. It is this awareness that inspired me to take on this project. 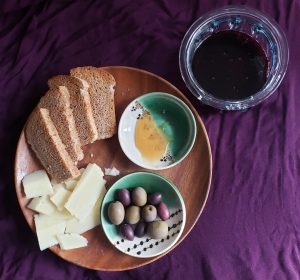 Ancient Roman breakfast with Pecorino Romano, spelt bread, wine, raw honey, and olives. Seasonal fruits like figs and grapes are another common feature. I confess to not altering a modern Lambrusco.

Ful Medames (or just ful), traditional Egyptian beans with olive oil, spiced with garlic and cumin.
Fava have been found in neolithic storehouses, but the modern idea seems to be 4th c. Bathhouses of medieval Cairo brought this dish into food staple status, as the beans were cooked in the same cauldrons as the bathwater was heated in overnight. “Ful” has many regional variations around the Mid-East, and recipes often include tomatoes, chilis, etc.

Grits and benedicts, homage to my brother

Grits & Benedicts, a homage to my brother. He gave me my first taste of Southern grits, but loved eggs Benedict.
Eggs Benedict appear to be a 19th century creation, but there is more than one claim to their origin.
https://whatscookingamerica.net/Eggs/EggBenedict.htm

Grits are a hominy porridge popular in the southern US.
https://en.wikipedia.org/wiki/List_of_porridges

Pemmican is a Cree protein bar, traditionally made from dried and powdered meat and berries.
http://www.tankabar.com/cgi-bin/nanf/public/main.cvw

Tamago Gohan
What Japanese folks apparently do with rice leftovers.
An egg is cracked over steamy rice with some soy sauce, maybe toasted sesame, and mixed. 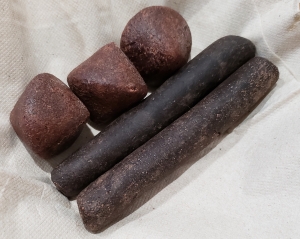 Jamaican Porridge and Chocolate Tea
The porridge is made from corn meal, spiced with nutmeg and cinnamon, and frequently sweetened with coconut sweeteners or sweetened condensed milk.

Bao buns are an easy answer to breakfast in China.
These are pre-made, and stuffed with teriyaki chicken.

Full British, a grand feast for a breakfast with bangers and meats, beans, blood pudding, grilled mushrooms, potatoes, and tomatoes, toast, and tea or coffee.  “The Full Monty” (WWII General Bernard Montgomery supposedly insisted on having a full breakfast campaigning in Africa) is popular throughout the British Isles, usually with a regional name (full English, Full Scottish, Etc. Sometimes “Ulster fry”)
Thought to be rooted in an Anglo-Saxon hospitality tradition from the 13th c. Come hungry.

Norwegian Rømmegrøt (sour cream porridge) and gravad lax
Like many recipes here, there are a lot of variations. Milk, wheat flour, butter, sour cream (sometimes the butter is heated out of the sour cream), and sugar. Very rich. Often served with cured meat or fish, and customarily served around Christmas.

Bacon & Eggs with toast, as close to Townsend’s 18th c. recipe that I can.

***
Barros Luco or Barros Jarpa, a hot meat and cheese sandwich from Chile. The first is made with beef, and named after the Chilean president from 1910-15 Ramón Barros Luco. His cousin, a senator, liked his with ham and is called Barros Jarpa.

***
Pain Perdu, or French toast. Roman author Apicius mentions bread soaked in milk and eggs, then fried, and an English cookbook from about 1430 mentions a recipe like this as well.  Using Townsend’s 18th c. instructions, with a sack wine, butter, and sugar sauce.

***
Bully Beef, hopefully served with a little bread, was often the only protein available to British soldiers in WWI trench warfare. “Bully”an English twist of the French word for boiled (bouilli), is beef in a Spam-like tin.

Chorizo e Huevos Mexican spicy pork sausage with egg, cheese, and sour cream. Taught to me by a friend who learned it from a Mexican gal. (my local grocer stopped carrying chorizo!)

***
Bread & Tea or Coffee common in many countries, including France, Italy, Zimbabwe and South Africa. These places usually place more importance on lunch.

…and still looking for more

There are certainly some commonalities with many of these dishes. Easy to make is essential.
The heartiness of the meal, however, has a lot to do with the importance a culture puts on it.
British countries clearly find breakfast very important, while many other places place more value on lunch, and leave breakfast with little more than coffee and a pastry or bread.