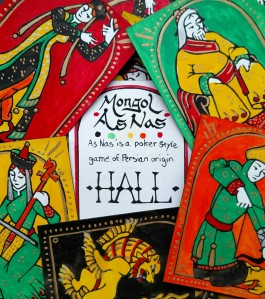 As Nas is a poker type game believed to be of Persian origin. Early specimens date to the seventeenth century, but like all asiatic cards scarceness and antiquity obscure its true source.
David Parlett, Author of The Oxford Guide to Card Games, mentions the research of fellow cards researcher Michael Dummett, finding that Persian literature does not appear to mention As-nas until the eighteenth century, and rules appear in the nineteenth century.
Packs are structured differently than the conventional base of 52 cards of four suits. As Nas consists of five suits of five repeated cards for a twenty five card pack. They are frequently constructed of thick card stock or even canvas, lacquered and then painted, often with illumination.
Popularity faded into obscurity by the Islamic Revolution in 1979.

Mongolian Anachronism
A Hordesman named Wendell of Dark River came to me with a request to make an As Nas pack, as he teaches classes on its play, and informed me that he had fabricated his own my altering five modern poker packs. Perhaps a Mongolian themed pack for The Great Dark Horde…?
Why not?

The cards, with Persian names, in rank order. There’s quite a bit of fluctuation in the figures, especially the lowest three. The colors can also fluctuate, and although not formally considered the “suit,” tend to provide consistency.

Color added as of 12/10/15, and an Arts & Sciences competition relevant has come up. Perhaps then is the best release time. This also gives me a window to produce a pack with more authentic materials. as well as illumination that will not translate so well from the printer.

Historic specimens are usually cardstock, although other materials have been found, much like other packs found in Asia. They are lacquered and often can easily be described as illuminated miniatures. 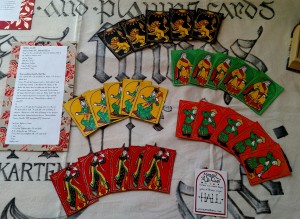 Lacquer
Authentic lacquer is a sap from lacquer trees toxicodendron vernicifluum applied fresh, and is rather difficult to acquire in the Western Hemisphere. It’s also related to poison ivy, and can cause rather nasty reactions. For this project, I’ll stick with modern substitutes.

9/23/16
I plan to produce a very few hand painted packs this month. I have a couple more details to iron out, and I will adapt as needed to produce them. Thanks to those who have been so patient.

3 thoughts on “Mongol As Nas: An Anachronistic Poker game”