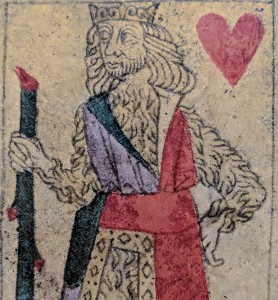 A Lyonnais manufacturer named Francois Clerc was compelled to replace carreaux (diamonds) with crescent moons sometime between 1485 and 1496. They are long and slender compared to their contemporaries, and give lots of hints at postures and other elements that make the patterns that would solidify in a few decades.

French Suits
Lyons appears to be the birthplace of the French-suited system; from 1444 records of “tailleurs de molles de cartes” appear here. Although the earliest specimens of French-suited cards haven’t surfaced, it is possible they were developed, and possibly even geographically planned to cater to both latin and germanic suited markets.
Game play and designs seem to have an impact on one another during early periods. By the mid fifteenth century it appears that a parent 52 card makeup has already been modified. Some markets remove cards that slow the pace of the game. The morisca pack, for example, was found without any tens, and is likely to have been made without, even at such an early date. German packs, on the other hand, began to appear without aces. Dropping a card from the pack benefits the printer as well, since a 48 card pack lays out nicely.
The game may determine the number of cards used, while the pips (suit signs) appear to have an  influence of their own. Latin suited cards have male (swords, batons) and female (cups, coins) suits, a feature that has an impact on the play of some games. German cards have no such conspicuous gender, making them less suitable for games such as “Hombre.”

French suits solves this problem with color coding.
Whomever developed the French suited system took careful consideration to make a system that was easy. Easy to manufacture, easy to read in low light, and easy for international markets to identify. The gender assignment is instead two colors: hearts and diamonds substitute coins and cups as well as harts and bells in germanic systems, while clubs and spades are short swords and batons, and easily look like german beechnuts and leaves.

So why mess with perfection by changing one of the symbols? Was this an attempt at a personal signature? Or perhaps a request from a client? Whatever compelled Mr. Clerc to produce crescents, it was likely not his first attempt at manufacture; these are masterfully created cards.
An illuminated pack appears with the same figures (wearing extra fancy attire, and with diamonds, not crescents), and may have been an example of multiple grades of product, perhaps?