Storage box with award game and scroll inside. The box was sold with wine bottles inside, and is nicely finished.

The “scroll” with proper text for the Award of the Dragon’s Heart. This is after the award was given, and signed.

After making the board played at Pennsic, THL Louis Xavier de Navarre commissioned me to make another for him. I had collected all the supplies and began prepping the canvas when I was asked to produce a scroll for him.
To have it presented in court is just too nice.

The Scroll and board are inspired by Alphonso X’s gaming book, and I have used the colors directed therein.

The two boards are roughly the same size, as well as the same construction.  The Scroll in the top of the box is also in the style of Alphonso’s book.  I hope it will get plenty of play. 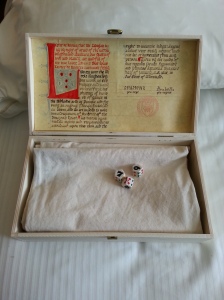 Inside of award box. The modern seven sided dice seen here were made with seven player backgammon in mind.