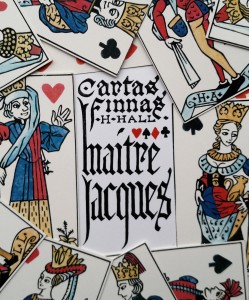 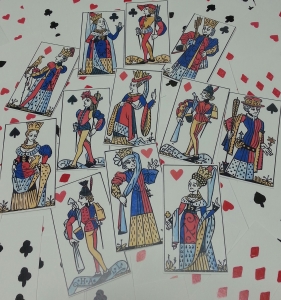 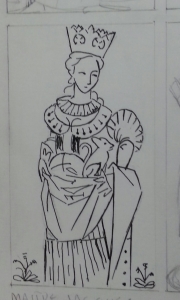 One of a number of damaged blocks found in Lyons in the nineteenth century. This Louis XI era pear wood set survives, but not without damage from wormholes, up cycling, and other abuse over the centuries. It is believed to be the oldest surviving French-style block.
Amidst the wormholes I realize there is a certain detail that is consistently damaged. Of the twenty cards that I have seen pulled from this block, about three quarters seem to have deliberately damaged faces, while almost all of them need a little facial reconstruction. I have not seen this sort of vandalism elsewhere.
Jacques style is different as well; they are slender and take up much less space than other cards I have seen. They have long necks and very high crowns and hats. Certainly the carver had seen such attire recently, or perhaps this was carefully replicated from another long gone design? How long was the block used for? late period writings on cards often mention the dated and garish attire, particularly that of the knaves. and indeed their vivid hose appear until they became double headed.
Like the Fougere Royale pack, I have no indicator as to colors or suit assignment. I am gifted and cursed with getting to make those decisions for myself.

Observation: use of this pack requires a little more familiarity with the attire than later French style packs. The kings wear long closed robes, and I find myself scanning the cards for gender elements such as bosoms and cod-pieces to help identify.