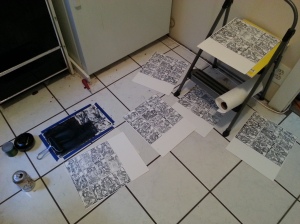 I am frequently inquired about production techniques. As I don’t really have short answers, I’ll try to fill in some of the history, as well as my own ‘anachronistic’ solutions.
The oldest evidence of playing cards comes from documents, but there are still production clues. 9th c. Tang Dynasty scribe Su E mentioned a princess who played a game of “leaves” with family, but specimens this far back do not survive. Being made of decomposable matter and intended to be handled, worn out packs were usually… discarded.
As the cards and their kin (dominoes, etc.) made their nebulous way across Asia, they could be found in the hands of nobility, and were often the product of a royal workshop. This system allows for exquisite miniature paintings, but rather limited production. In 14th century Europe, this all changed. 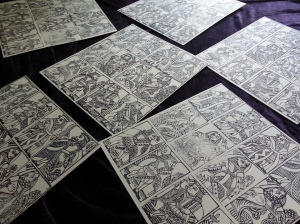 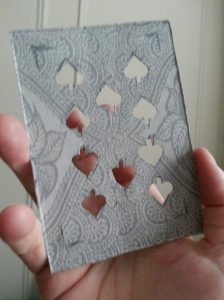 test stencil, made from a recycled tea box

The Caliphate had been importing paper to Spain since about 950, and built a paper mill in Xativa, near Valencia, about 1150. It is unclear exactly when the idea of printing on paper came about, but its application  with playing cards was a perfect match, allowing for cards to be produced quickly and cheaply enough for widespread popularity. Now that playing cards were available at an affordable price, more and more people used them, and laws banning or taxing them begin to appear. The market for cards continues to expand for many centuries, and manufacturers had to keep up.
This is a study in early mass-production. 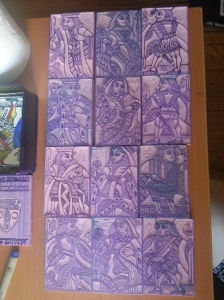 Trouble is, I live in a tiny flat.
It is my desire to produce the cards as accurately as possible without compromising their playability (see my Astronomical Tables article). I have produced a number of packs now, researching images, production, etc., but primarily with the pursuit of authentic play. The good news is that the play and image aspects are progressing. Production is another matter.
Accurate equipment is industrial equipment. It was fabricated with the intention of producing hundreds of prints all day, for years at a time. The presses were produced by skilled craftsmen with precision. It would need, at very least, its own room, which is a luxury I currently do not have.
I do have a nice piece of pearwood for carving, and have already produced a xylographed English pack, but I can only accommodate enough prints for proofs. At present this is fine, because then I can concentrate on playability.

As I have limited space, my equipment is also downsized, and I will not slow what production I am able due to this compromise. On the other hand, much about card production involves recycling, and I have suitable cardboard recycling for the task.

I recently produced a number of packs, and in doing so, realized that I have encountered many of the obstacles of card makers of the past. Even if some elements are substituted with modern equivalents, there are still consistent themes:
-the need for industrial equipment and the real estate/structure to house it
-equipment maintenance
-consistency from batch to batch, be it paper, inks, paints
-recycling
-marketing
Taxes were a stronger consideration to the kartenmaler in history, as they have been treated as a vice since the earliest of times in Europe.  This sort of revenue was often used to fund military campaigns, and bans or import tariffs would protect local craftsmen while padding royal pockets. King James of England’s tax stamp Started at six pence, or about $5, and went up from there. I have no such burden, as most tax stamps disappeared in the 20th century. 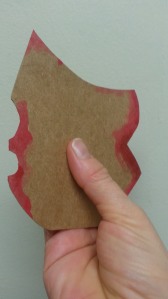 One thought on “On the Production of Period Playing Cards”